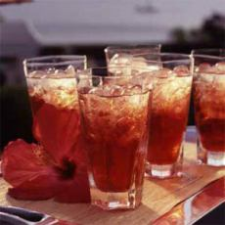 “After extensive test market research in Hong Kong, we knew our products were ready for the U.S. market by way of Chicago, a city with a prominent cocktail culture,” says Nick Chen, chief of staff for Branded Spirits. “Chicago can often influence trends in the spirit industry for the rest of the country, making it the perfect location for our brand launch.”

The distinctive flavor profiles of each of the spirits launching in Chicago include:

Ice Fox is 100% American product that has been triple-distilled from premium American ingredients, including corn from the Corn Belt and pristine water from the Sierra Nevada mountain range. Branded Spirits’ master distiller watches over the production of every batch on Treasure Island, CA, where it is bottled in small batches. 40% ABV, 750ml, $19.99 SRP

Hana is named after the Japanese word hana, meaning “flower,” which is the inspiration for the gin’s botanical profile of juniper and lemon citrus, among notes of lavender. The bottle design features an etched glass orchid on the back. 40% ABV, 750ml, $19.99 SRP

HM The King, produced in the Highlands of Scotland, provides notes of vanilla and honey on the palate that give way to a smooth and round aftertaste with light smoke and peat. The HM on the bottle stand for “His Majesty” the King, as the final blend was signed off on by the late King of Tonga. 40% ABV, 750ml, $24.99 SRP

Majesté VSOP is matured for four years before being bottled and offers a discreet, well-balanced bouquet with both fruit and floral notes. It is available in limited supply. 40% ABV, 750ml, $47.99 SRP

Branded Spirits initially launched in Hong Kong in 2010 after CEO and Founder George Chen, who has worked successfully in distribution in Asia for more than 25 years, decided to branch into production. In late 2010, Chen founded Branded Spirits with the goal of creating a product line, then he and his team spent the next two years in research and development of every aspect from the packaging to the types of liquors in the portfolio. After three successful years of in the Hong Kong and China markets, Branded Spirits began distributing to the U.S. with the goal of launching in 10-15 states by the end of 2014.